I dislike when politicians and media talk about "online privacy". It's as if it's a specific notion that only applies to a virtual world detached from reality. Perhaps many discard its importance and translate it to "something to do with computers ?".

When politicians start talking about "online privacy" it trivialises the matter when in fact, it's privacy in general that is being discussed.

In reaction to the Charlie Hebdo attacks some are trying to reduce people's freedom of access to information. This censorship has the side-effect of making attempts to access blocked websites known to the authorities.

David Cameron has proposed further restrictions on British liberties. He states that all communications must be readable by the government. The UK has already lost much privacy and freedom, this proposal takes it the next level and beyond. 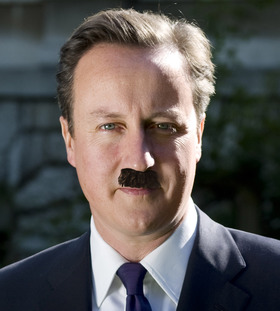 Hitler's moustache with David Cameron's face in the background
This file is licensed under the Open Government Licence v1.0.