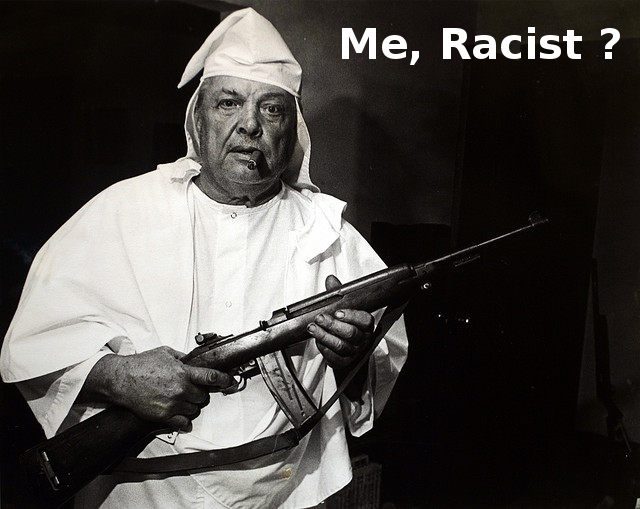 Too many times lately I've read prejudice criticism about certain groups of people as a whole, like Gypsies, Muslims, Jews, etc... The critiques of these opinions often use the term "Racist". The defenders of these opinions retort that it's not racism if they're not talking about race.

Basically this form of gratuitous hate is directed against those who live their lives against the free will of the bigots. The key thing is that they justify their hate speech by claiming they are not being racist in any way.

April Chambers, secretary of the North Georgia chapter of the Ku Klux Klan, told CNN: We're not racists, we just want to be with white people.

I've read through the KKK's FAQ and they say they don't feel any hate towards others, be they of other race, religion or lifestyle. This is what they say:

Q. Why do you hate black people, Asian people, etc.?
A. This is a misconception many people have.

Q. You say you don’t hate minorities, but they can’t join The Knights. Doesn’t that make you all prejudice?
A. Non-white can’t join The Knights because we do not believe in integration or social mixing. There are many organizations working for the advancements of different races. There is nothing wrong with this.

The cheap attempt at political correctness is now in style with groups that promote homogenous populations. The KKK considers themselves a non-racist anti-violence loving bunch of people who just want to hang out together. The problem is: people capable of believing this stuff. With this sort of wording they may be attracting more sympathy than they should, especially when pronounced by groups who haven't the KKK's stigma.

This all becomes very worrisome when the ruling right wing party of Hungary (not the far right) has close friends that say things like "Roma shouldn't be allowed to exist".

This is the point where defenders of these horrible opinions will push away any comment using the word "racism". And they might even be technically correct. I don't call them racist anymore, I do however compare them to the KKK, because the KKK isn't a racist group either... .. right ?

I suggest, when discussing and commenting on these matters to not use the words "racist" or "xenophobic", there must be a better word. So far I have found "prejudice" and "bigot", let me know if you find better terms or other ideas.

Parties with prejudice views are gaining momentum in Europe.

There's UK politics that has been running around the "foreigners took my jobs" theme, enough for the Conservative party to consider a negative campaign to dissuade foreigners from Bulgaria and Romania from considering immigration to the UK.

They also have Pat Condell, a comedian who has been making prejudice idiotic over simplified anger videos against all religions, but mostly against Islam. He claims not to be a racist, and technically he is not. He's openly against any religion because to him they are all stupid and harmful, again, especially Islam. His recent affiliation with the UKIP party clarifies any doubts I could have possibly had.

The part that has me worried is that he has managed to attract support from many well educated people, including Richard Dawkins. There are many posts on Dawkin's website, including this video of Condell explaining that Islam killed over 3000 people on 9/11. You can even buy Condell's work hate propaganda disguised as truth based comedy from Dawkin's site.

In France there's enough popularity in the extreme right wing to support newer far right parties like Bloc Identitaire as well as others. They often play with the terms "identity" in favor of the more old fashioned "nationalism". It appeals more to the new generation.

There's more of this everywhere, from Greece to the Netherlands. The use of the "it's not racism" card is the most common denominator. It needs to be made very clear: Technically not-racism, doesn't make it okay.

These bigot views use the same mechanisms as racism, however instead of race they use other parameters to define a group of people and then categorise them as a whole as being inferior, evil, unwanted and so on..