I don't know when, but clearly it's been a while that the News™ has become more of a brand or a word to define events that somehow relate to reality rather than actual news. It's becoming infotainment.

Today I read an "article" which illustrates perfectly where we're at. A fictionnal letter from Terry Gou, founder of Foxconn to Donald Trump, president-elect of the United States of America (North America).

In this fake letter, Terry mocks Trump. And that's about it. The author expresses some sort of fantasy revenge-reality by proxy which brings nothing to the table.

This is reminiscent of Tarantino's recent movies, such as Inglourious Basterds and Django Unchained (possibly The Hateful Eight, I didn't bother) which attempts to give the audience a bit of revisionist-revenge. (Side effects may include peer pressure to "like" the movie or be considered a Nazi sympathiser).

I like that it’s the power of the cinema that fights the Nazis. But not just as a metaphor, as a literal reality.

If by "literal reality" you mean "figurative fantasy"...

The blending of reality and fantasy is obviously dangerous and should not, in my opinion, exist in news outlets. Like Tarantino's movie, there's no point or added value, it's not funny and it only serves to satisfy and nourish a disbelief of reality.

The news is becoming a joke, it's full of irrelevant stories (Trump's hand size and haircut is not news), clickbait articles with sensationalist titles and plain fantasy pieces. It's not surprising that fake news sites are growing everywhere and conspiracy theories are often their food. Pizzagate could be just a taste of what's coming. 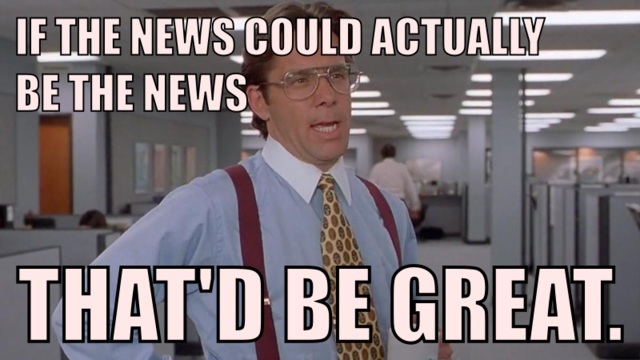